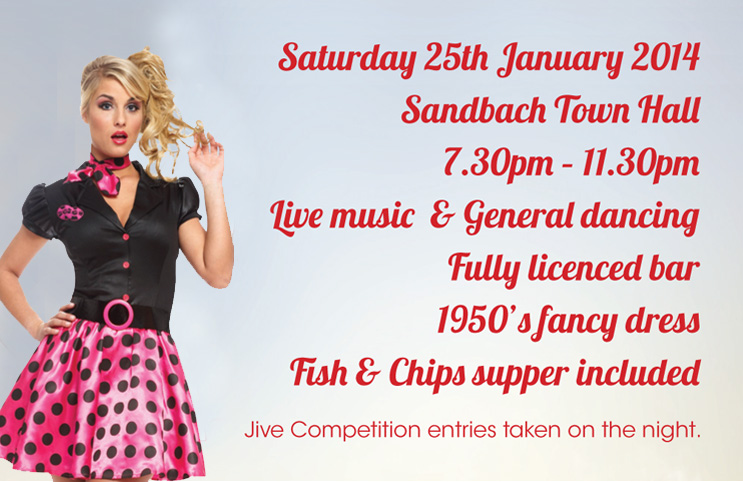 Sandbach Town Hall was the venue for another Jumpin’ Jiving evening of general dancing, hosted by dancebespoke with live music from the Jalapenos and entertainment. The evening began with a short speech by the Mayor, Mike Benson thanking everyone for their support, and also to everyone who had pitched in to organise such a wonderful evening. His daughter Jenny was the inspiration for this charity night after needing the services of the air ambulance last year, following a serious motorbike accident. The room was packed with over 120 spectators and keen dancers, showing off their 50’s outfits as well as their moves! Courtesy of Fran Halliwell a fabulous programme of 50’s songs and dance demonstrations was performed by the talented children of the Cheshire Academy of Performing Arts. What a superb start to the night.

The main act was the much anticipated energetic live music from “The Jalapenos” which ensured a lively atmosphere all night. Toes were tapping and jaws were dropping as they watched this dynamic band play guitars over their heads, spin around and keep the crowd in the mood. Rachel & Steve Brandreth from dancebespoke remarked on the turn out and the support for the night: “Good luck to all couples who have entered the dance contest. And thank you to those of you who have travelled especially to be here tonight, to raise money for such a worthy cause.” The evenings adjudicator and World Solo Style Champion, Michelle Robinson was welcomed to the floor as the crowd showed their support. Dancers readied themselves for the Jive Competition and the music kicked in. On lookers were dazzled by displays of Jive, Rock n Roll and also some original moves during two heats of this exciting competition, before an energetic final. Then it was up to the crowd who voted for their favourite couples. The evenings results were as follows:

Before the evenings dancing continued, a well earned Fish and Chip supper was served from the local chippy. The room was served 125 hot portions at an impressive pace, and everyone contentedly tucked in. The success of the evening and generous donations from the spectators meant that a huge £893.97 was raised in aid of Cheshire Air Ambulance.